The European Parliament Television interviews the President of DCH 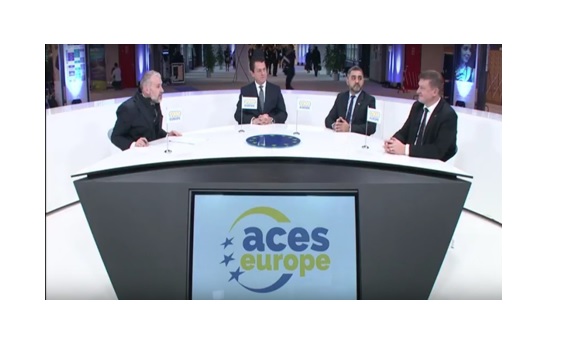 Last November 16th, ACES Europe granted the European Capital, Community, City and Town Award at the ceremony held annually at the European Parliament in Brussels. This year also adding a new Award to the mentioned recognitions, a new initiative that has been launched by DCH in partnership with ACES Europe, the European Sport and Healthy Company Award.

Coinciding with the granting of the mentioned awards, the European Parliament Television in Brussels interviewed Juan Carlos Pérez Espinosa, President of DCH, who, broadcasted live, explained the granting of this new Award.

Participants in the round table included Lukas Vorel, Member of ACES Europe Board, who mentioned the Award granted to Prague (European Capital of Sport); Nuno Santos, President of ACES Europe Portugal, appreciating the work done in Setubal and Gondomar (European Cities of Sport) and Juan Carlos Pérez Espinosa, President of DCH, announcing the new initiative that promotes good practices among employees, because “health and sport are fundamental subjects in the agendas of all the Human Resources Directors of the leading companies throughout the world, as demanded by society”.

Hugo Alonso, General Secretary of ACES Europe, moderated the round table and explained that the candidatures are becoming more and more stronger and demanding, even in Portugal they are already working on the candidatures for 2018 and requests for 2019 are already arriving.

The intervention finished with the granting of the European Sport and Healthy Company Award, and, as stated by Hugo Alonso, who assured that this award will be a complete success, by focusing the interest in the private and corporate sector. This Award begins granting Cofares this prize, from the hands of  Gian F. Lupattellli, President of ACES Europe and Juan Carlos Pérez Espinosa, President of DCH.

We remind you that the companies receive a first recognition once the Evaluation Committee  has completed its assessment for eligibility and whose score exceeds an overall rating of 80 out of 100. The candidate companies are granted the European Sport and Healthy Company Award when they have implemented the policy and practices that promote health and sport among their employees.

After the Award and for a period of three years, the Company must develop activities to improve the facilities they already have; and after these three years, the real impact on its employees at the internal level is assessed as well.