In a sports hall on the edge of Alhama de Murcia in southeast Spain, an aspiring Lionel Messi can enjoy a lunchtime game of football inside a modern, purpose-built complex. But this is not a professional sports club, or the facilities of a prestigious university. First and foremost, this is a recreational area for the 4,150 employees of ElPozo Alimentación, an agri-food company which sells meat products to four out of every five Spanish households.

Over the past two years, ElPozo has invested 170,000 euros in sports facilities exclusively for the use of its staff members. Arranged over an area of 5,000 square metres, the compound includes a gymnasium, paddle and regular tennis courts, and a covered pavilion designed for football and other sports such as table tennis. The company also sponsors the Spanish Paralympic Team, the ‘La Vuelta’ cycling tour of Spain, and the indoor football team, ElPozo Murcia. The 2018 European Sport and Healthy Company Award presented to ElPozo Alimentación recognises not only this investment in sport and sporting facilities, but also the company’s commitment to promoting good health in its working environment through other initiatives and programmes. These include vaccination and blood donation campaigns, a school of joint health, and doctors who are available 24 hours a day, 365 days a year. To discharge these services, there are two modern surgeries and a complete ElPozo medical team comprising two doctors, six nurses, three auxiliary assistants and a clinical psychologist. Supplementing it all are healthy canteen menus and – since this is Spain – a dedicated siesta room. “When we think about health and sport for our workers we never do so looking for earnings or returns in economic terms,” company president Tomás Fuertes says. 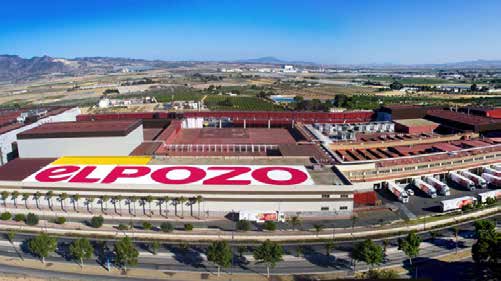 “We are convinced that if the facilities where you carry out your job are the most ground-breaking in the world, then we are favouring an environment where our workers feel prouder, identify more with the company and most certainly, are more productive.” Rewarding good practice The European Sport and Healthy Company Award was born in 2016 when ACES Europe joined forces with the International Organization of Human Capital Directors (DCH), a highvalue contact network which gives a platform for top HR professionals to share their experiences and knowledge. “The promotion of good health practices among employees is an essential requirement in the work agenda of human resources managers in the main companies,” says Juan Carlos Pérez Espinosa, president of the DCH Board of Directors. “This is in line with society’s demand to promote policies related to health and sport.” To further strengthen and extend the reach of the award, in March 2017 the DCH and ACES Europe created the European Healthy Companies Association (EHCA) through another partnership agreement. “We wanted to build on the success of the award by creating a big portfolio of companies that are very committed to sport for employees,” says Hugo Alonso, the general secretary of ACES Europe.

“So we formed the European Healthy Companies Association to work as an independent body for the development of best practices in the corporate field.”

The bid process In order to qualify for the European Sport and Healthy Company Award, candidate companies must be based in one of the countries of the European continent, and should be able to demonstrate a clear commitment to sport and to promoting physical activity and a healthy lifestyle among its employees. This can be shown through giving staff access to sports facilities – either owned by the company or provided in collaboration with third parties – and by implementing specific action and health. To begin the assessment process, an applicant company must formally declare its candidacy in a letter signed by the chief executive, managing director or president. “The companies vying for the award must then provide EHCA with a bid file which reflects implanted policies of sport and health in their organisations as a prerequisite of their candidatures,” says DCH Business Development Director, Nuria Simal. “The evaluation committee then visits the companies to gain a global view of their candidatures and to evaluate the content of the bid file.” programmes for The first company to be given the new distinction was Cofares, a Spain-based pharmaceutical business boasting over 9,500 pharmacists as cooperative partners, and more than 3,000 pharmacies as clients. It received the award on 16 November 2016 at a ceremony in Brussels attended by Tibor Navracsics, the European Commissioner for Education, Culture, Youth and Sports. Cofares is followed in December 2017 by ElPozo Alimentación, which operates under the Grupo Fuertes umbrella.

According to Kantar Worldpanel’s Brand Footprint 2017 ranking, ElPozo products are present in 78.9 per cent of Spanish households, making it the leading supplier of fresh and cured meat on the Iberian Peninsula. employees in the fields of sport  After ElPozo had presented its award candidacy to EHCA, an evaluation committee headed by ACES Europa President Gian Francesco Lupatelli conducted an audit of the company’s headquarters in Alhama de Murcia, a Roman spa town of 20,000 people set in the fertile valley of the river Guadalentín. Following the outcome of the first visit and the analysis of the bid file, the evaluation committee – formed of ACES Europe officers and representatives of DCH – assigned scores to each of the eligibility criteria. To pass, ElPozo needed a minimum of 80 points from a maximum achievable total of 100. Ultimately, the company’s membership in the programme was approved, with the award presented on 6 December. “It is a very important award for us, for its European significance,” Tomás Fuertes says. “It is recognition for a company whose objective is not only to make the best healthy and nutritional products available to consumers, but also, in addition, a company which is obsessed that those who produce these products do so in the best environment of well-being possible.” Post-award review For ElPozo Alimentación – and for Cofares before it – the benefits of the European Sport and Healthy Company Award are not confined to a prestigious gala event in Brussels. Once a company is confirmed as a winner, it contributes a fee of 6,000 euros for membership of the programme.

Each awarded company then enters into an ambitious development project, with realistic and measurable goals tailored to its own circumstances and needs. “The granting of the award in the European Parliament begins a threeyear period of improvement and achievement of objectives following the adherence to the programme. This adds more value to the award,” says Nuria Simal. The EHCA evaluation committee monitors each project by reviewing the resources included in the winning submission, and by making an annual physical visit to the company facilities. For this, the company pays an annual fee for  maintenance and continuous evaluation of 2,000 euros. Once the three-year assessment process has been completed, a report will be issued including the validation of the company’s award in one of three categories: gold, silver or bronze. “Thanks to this distinction, a network of healthy and sporting companies will be created, which will promote good practices in this area,” says Nuria Simal. “In addition, it will provide a competitive advantage and an increase to their productivity.” From 2018, the EHCA will additionally grant the International Sport and Healthy Company award to non-European companies operating worldwide. Both awards will be presented alongside the European Capital, City, and Town of Sport awards at the gala event in Brussels.

ELPOZO ALIMENTACIÓN’s commitment to the health and well-being of its workers dates back to the company’s origins and constitutes the main focus of its Corporate Social Responsibility (CSR) policy, both internally and externally. ELPOZO employees have 5000 square metres of their own exclusive sporting spaces at their disposition. The offer includes a gymnasium, paddle and tennis courts, basketball court and an extraordinary covered pavilion to play indoor football and other sports such as table tennis. The facilities are open from Monday to Sunday, in the morning, afternoon and evening until 9pm. A wide timetable which enables workers to use them more easily as they can be adapted to their interests and different working days. The company has invested 169,704 euros in the sports facilities over the last two years. Doing sport regularly and good food are the perfect way to promote a healthy life. For that reason, ELPOZO ALIMENTACIÓN also worries about its workers’ food and offers healthy menus in its different cafes. The dishes are revised and approved weekly by the company’s medical service depending on the activity and physical effort that the majority of the employees undertake.

ACTIVE, POSITIVE AND HEALTHY LIFE IN THE WORKING ENVIRONMENT

The implementation of health programmes in the company has a long history. The last one that the company started was a pioneering programme called ‘School of Joint Health’. An instructor specialised in the mechanics of movement provides guidelines adapted to each professional profile so that workers can follow them before, during and after the working day. They have already trained 3000 workers and this month a new edition kicks off to continue increasing the number of beneficiaries in the company.

ELPOZO ALIMENTACIÓN’s interest in health translates into more and better services every year. The company, with a surface area of 250,000 square metres, has two modern doctor’s surgeries which offer medical assistance 24 hours a day and a system of medical check –ups all year long. The team of health workers is made up of two doctors, six nurses, three assistants and a clinical psychologist, guaranteeing a full and convenient service in the workplace.

For ELPOZO ALIMENTACIÓN doing sport represents values which are completely in line with its business philosophy, such as discipline, commitment, effort, companionship, and overcoming difficulties. A clear example of this commitment is the sponsorship, for more than 25 years, of the ElPozo Murcia Indoor football team which is in First Division. In addition, it sponsors the Spanish Paralympic Team and the Spanish Cycling Tour “La Vuelta”.

• 63 years of history. The business undertaking began with a small food shop in ElPozo Concejil square, in Alhama de Murcia.

• More than 1000 million euros turnover. The company exceeded a turnover of a billion euros last year.

• 1500 references, of both processed products as well as fresh and cured.

• It sells more than 2 million hams a year