Creation of the European Sport and Healthy Company Award 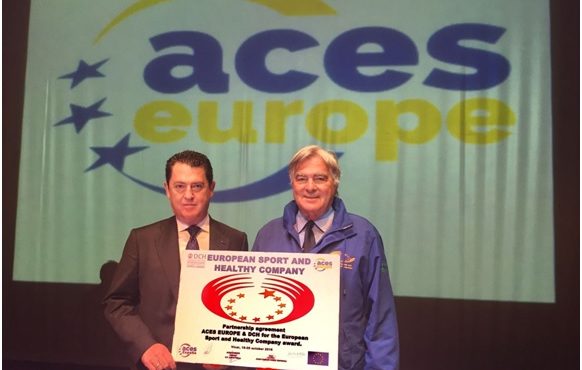 DCH- International organization of Human Capital Directors, has signed an agreement with ACES Europe to grant the European Sport and Healthy Company Award. Present at the signing were Juan Carlos Pérez Espinosa, President of DCH and Gian F. Lupattellli, President of ACES Europe.

Since its inception in 1999, ACES Europe seeks to promote sport among all the citizens of the European Union, encouraging private and public initiatives in order to increase support for sport, not only from a professional point of view, but also as a channel for social cohesion and to improve the health and quality of life of citizens.

It will be from this year 2016 on, when both organizations set up the European Sport and Healthy Company award. The candidate companies should contact our Organization and submit a report including their sport and healthy activities and facilities, current and future.

A Company may be candidate whenever it meets the following prerequisites: It must have a clear commitment to sport, physical activity and health of its employees, have sport facilities either of its own or in collaboration with third parties, as well as specific action programs in the field of Sport and Health for its employees and it must be based in one of the countries of the European Continent.

The candidate companies will prepare a bid file of the candidature which will be delivered to ACES Europe & DCH in digital format two weeks prior to the visit of the Evaluation Committee (from 3 to 5 Commissioners) and in physical format the first day of the visit). Following the first visit and the assessment of the bid file, the Companies successfully selected for adherence to the Program will be designated at the Gala held annually at the European Parliament in Brussels.

During the first three years following the adherence to the Program, the Evaluation Committee will follow up the committed and approved Project, assessing the facilities and resources developed by the company, requiring the necessary documentation and information. Once the assessment process has been completed, a report will be issued including the validation of the Company award, and this will be granted at the following gala to be held at the European Parliament in Brussels.

The aim of this Award is to certify the effort made by those Companies promoting sport and health among their employees.