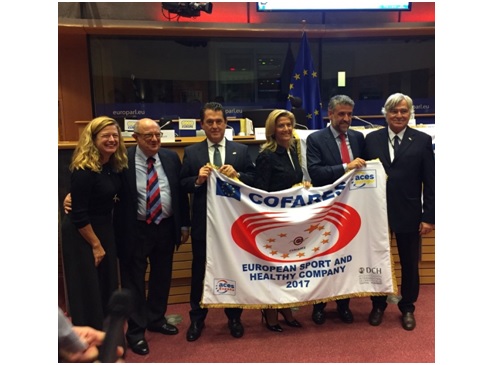 Cofares has attended the gala held annually at the European Parliament in Brussels, coinciding with the European Capital, Community, City and Town of Sport Award Ceremony.

It was yesterday when Cofares received the European Sport and Healthy Company Award at the European Parliament in Brussels from the hands of Gian F. Lupattellli, President of ACES Europe and  Juan Carlos Pérez Espinosa, President of DCH.

The award ceremony was honored with the presence of Tibor Navracsics, European Education, Culture, Youth and Sports Commissioner.

Cofares becomes the first Company to win the Award, after presenting its candidature and once checked that it met the three essential prerequisites to apply for the distinction; it has a Department of Health at work (commitment to sport, physical activity and health), sport facilities (of its own or in collaboration with third parties) as well as specific action programs in the field of Sport and Health for its employees. It is also based in one of the countries of the European Continent.

When the 3-year assessment process has been completed, a report will be issued including the validation of the Company award and it will be granted at the Gala held at the European Parliament in Brussels.